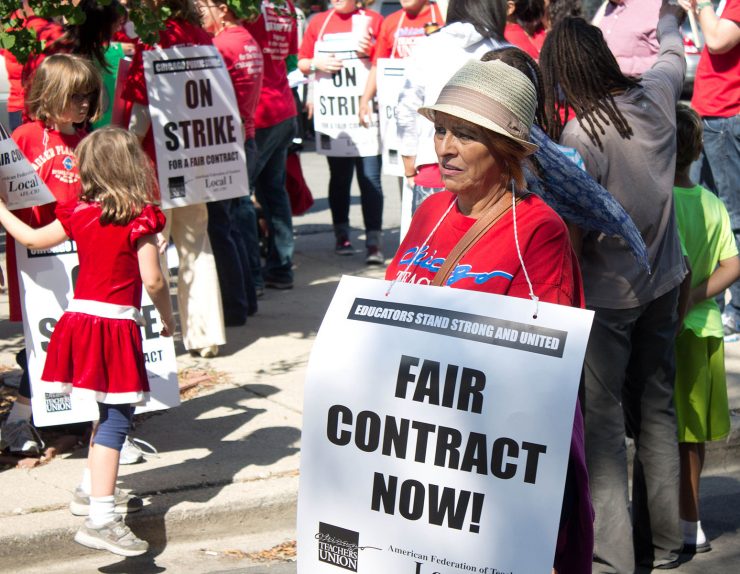 What Is The Truth About Collective Bargaining?

Often, workers hear about collective bargaining without fully understanding it. Here it is in a nutshell:

Collective bargaining is one of the cornerstones of the National Labor Relations Act.

Simply put, collective bargaining—also called negotiations—is the process where an employer bargains with a union (or other representative) over “wages, hours of work, and other terms and conditions of employement.”

Obligation to bargain collectivelyFor the purposes of this section, to bargain collectively is the performance of the mutual obligation of the employer and the representative of the employees to meet at reasonable times and confer in good faith with respect to wages, hours, and other terms and conditions of employment, or the negotiation of an agreement, or any question arising thereunder, and the execution of a written contract incorporating any agreement reached if requested by either party, but such obligation does not compel either party to agree to a proposal or require the making of a concession… [Emphasis added.]


What this means is that, under the law, employers and unions have to bargain and neither party can refuse to bargain.

However, it also means that they do not have to agree.

There is also no time limit to negotiations. Often, negotiations takes months and, sometimes, even years to reach an agreement–if the parties can agree.

Going to work at an already-unionized employer is much different than unionizing a company for the first time and attempting to reach a first-time agreement.

In fact, for newly unionized workers, studies have shown that unions fail to reach to reach agreements nearly 50% of the time.

In cases mediated and closed by the Federal Mediation and Conciliation Service in 2003, only 56.5 percent of new bargaining units had achieved a contract within the inaugural year (FMCS 2003 Annual Report.) In his 1987 study, Eisenscher (1999) estimated that 5 years after recognition only 47 percent of workers were able to win second contracts and according to Gordon Pavy of the AFLCIO’s Center for Collective Bargaining, of the 74,309 workers winning bargaining unit representation in 2003, only 37,000 will still be union members in 2008. [Source.]


Despite this abysmal track record, unions still sell thousands of workers on the idea of unionizing.

In the end, though, everything workers have (i.e., wages, benefits, and other conditions of employment) gets bargained over.